Nothing makes you smile in the morning when you are heading west than to see the big red ball of the sun in your rear view mirror and not in your face. Leaving Biloxi behind this morning,, we wonder about the NASA Michoud Assembly Facility and the NASA Stennis Space Center as we see signs for these places along the road. Why don’t I remember seeing anything about these places before? The Michoud Assembly Facility, largest in the country, assembles rocket engines while the Stennis Space Center tested them. Reading about these places we learn there are 10 NASA centers in the US. Learning everyday. 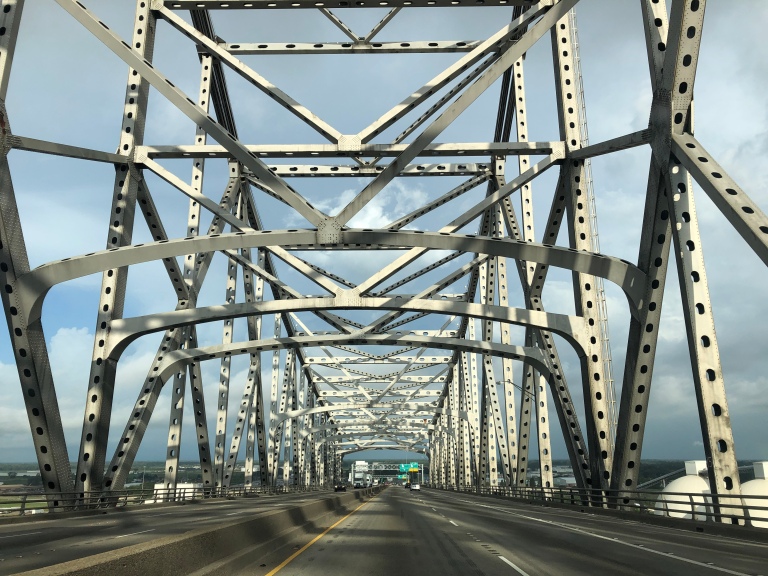 Baton Rouge, LA borders the Mississippi River so we drive across the I-10 bridge and enter the Atchafayla National Heritage area. The Atchafayla River basin is the largest wetland and swamp in the United States, larger than the Florida Everglades. Wondering where crawfish come from? 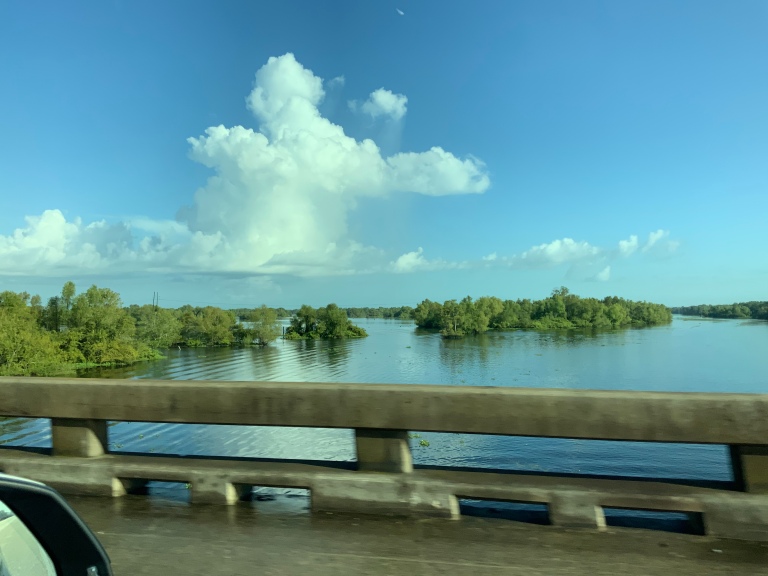 Although the roadside billboards advertise “Boudin and Cracklins,” a Louisiana meal – aka Cajun Sausage and Pork Rinds. Reading about it, it suggests eating it with cane sugar syrup. Yikes! Other billboards, remind us of Morgan and Morgan.

We turn off on I-12 then onto I-49 – Louisiana – land of the swamps, farms fields and forests. 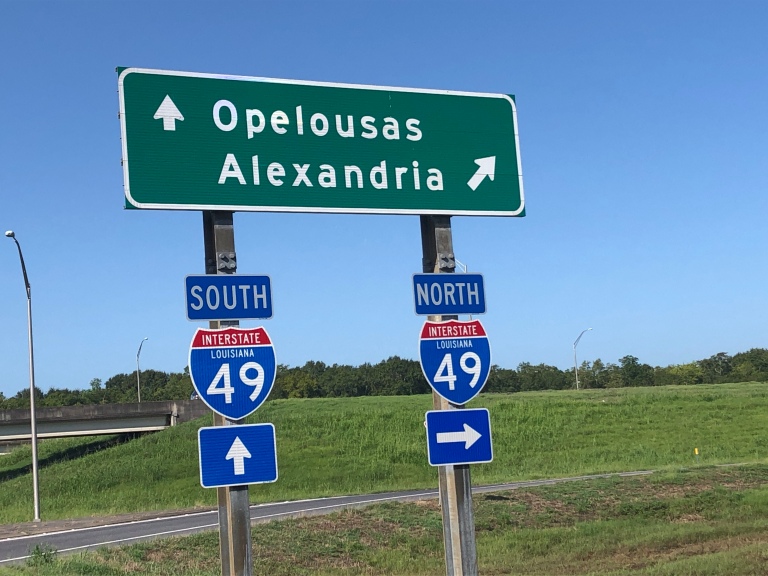 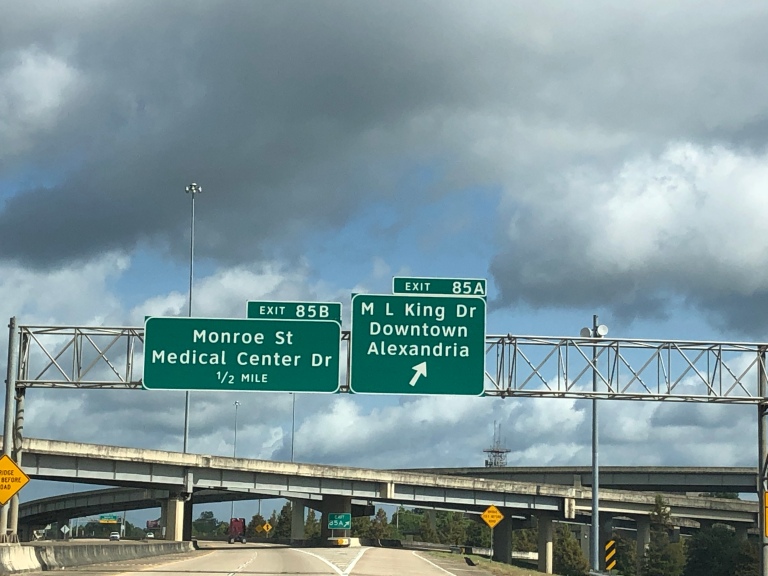 Actually, the most memorable for Steve and our son, is Ft. Polk. Steve enlisted in the U.S. Army 50 years ago next month and did his basic training at Ft. Polk. Our son served in the U.S. Army for 5 years and his home base was Ft. Polk. I remember driving on I-49 to Alexandria to head to Ft. Polk to visit our son. It’s still very hot and humid with no wind – as it has always been.

Further down the road, 4 police cars have 4 cars pulled over. Good thing we stopped for a restroom break! Although, our rule is 4 miles over the speed limit ;). Another interesting sight is a truck loaded with cotton. Not something you see very often. 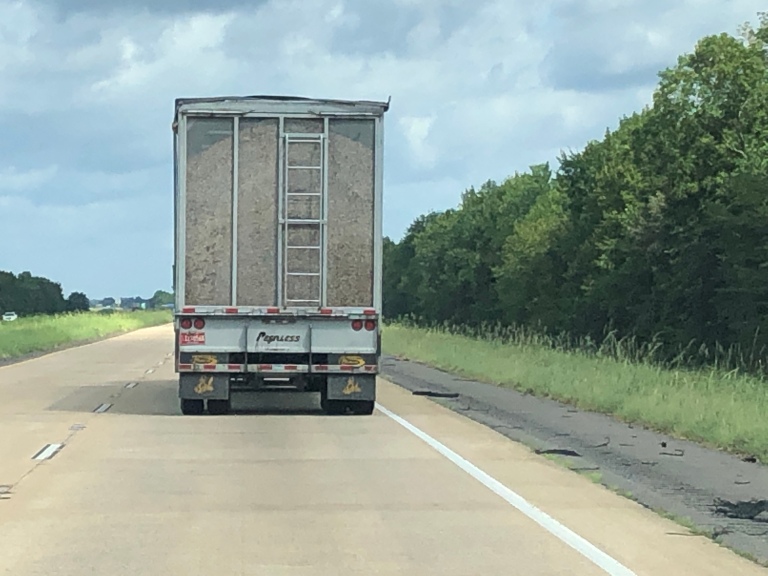 So why is there a cement ‘sidewalk’ being built in the median of I-49 we asked Mr. Google? It seems this is the start of putting up a cable fence in the median between the north/south lanes to prevent head-on-collisions. Just never saw this being done before. Further up the road we see where the cable fence has already been installed. Now it all makes sense. “Stay Alert. Stay Alive” as the old roadsigns said.

Shreveport, LA is where we pick-up I-20 towards Dallas and the traffic becomes heavier again. Interesting fact, near Shreveport is Barksdale AFB where President George W. Bush’s plane landed on September 11, 2011 after leaving Sarasota, FL’s airport.

I’m always curious about the Interstate System and why did they build an interstate. I-20 was actually to replace US Highway 80 which ran from Tybee Island in Georgia to San Diego in California. Eventually as the interstate system was built US 80 faded into history and was replaced west of Texas as I-30 which is now where I-20 begins. 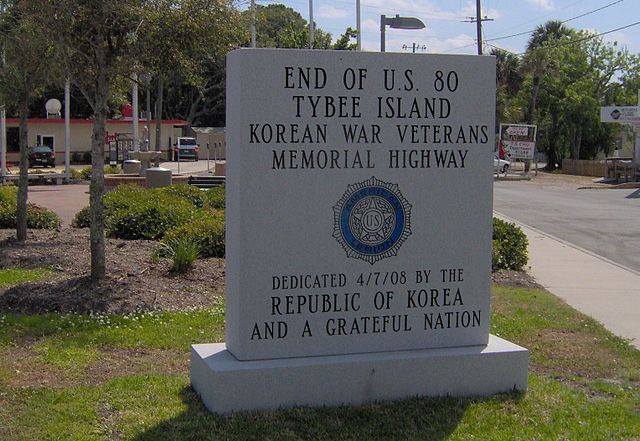 Can you tell I’ve been sitting in the passenger seat for awhile? Soon I will be behind the wheel again to drive us in to Dallas and our stop for two nights to visit family and friends.

See you at the Galleria later today after we check-in to our hotel in the Big D.